A Constitutional Order of States? Essays in Honour of Alan Dashwood 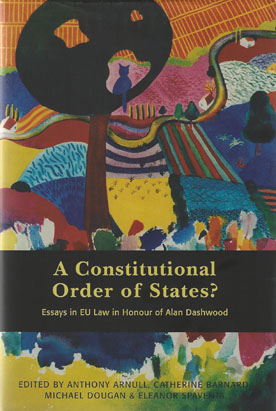 This collection celebrates the career of Professor Alan Dashwood, a leading member of the generation of British academics who organised, explained and analysed what we now call European Union law for the benefit of lawyers trained in the common law tradition. It takes as its starting point Professor Dashwood's vivid description of the European Union as a 'constitutional order of states'. He intended that phrase to capture the unique character of the Union.

On the one hand, it is a supranational order characterised by its own distinctive institutional dynamics and an unprecedented level of cohesion among, and penetration into, the national legal systems. On the other hand, it remains an organisation of derived powers, the Member States retaining their character as sovereign entities under international law.

This theme permeates both the constitutional and the substantive law of the Union. Contributors to the collection include members of the judiciary and distinguished practitioners, officials and academics. They consider the foundations, strengths, implications and shortcomings of this conceptual framework in various fields of EU law and policy. The collection is an essential purchase for anyone interested in the constitutional framework of the contemporary European Union.

Contents:
PART I: CONSTITUTIONAL FABRIC
1.
Is the European Union an Organisation of Limited Powers?
Derrick Wyatt
2.
The Status and Rights of Sub-state Entities in the Constitutional Order of the European Union
David Edward and Joxerramon Bengoetxea
3.
Ireland and the Lisbon Treaty: All's Well That Ends Well?
Anthony Arnull
4.
Where Will the Lisbon Treaty Lead Us?
Jean-Claude Piris
5.
Does Europe Need a Constitution? Achievements and Challenges After Lisbon
Ingolf Pernice
6.
Over the Rainbow: Languages and Law in the European Union
Margot Horspool
PART II: JUDICIAL FABRIC
7.
The Court of Justice as a Constitutional Adjudicator
Eleanor Sharpston and Geert De Baere
8.
The Relationship between the European Court of Justice and the European Court of Human Rights
Christiaan Timmermans
9.
Reforming Some Aspects of the Role of Advocates General
Rosa Greaves
10.
The Role of General Principles of EU Law
Koen Lenaerts and José A Gutiérrez-Fons
11.
The Horizontal Application of Fundamental Rights as General Principles of Union Law
Eleanor Spaventa
12.
In Defence of Mangold?
Michael Dougan
13.
Edging Towards Closer Scrutiny? The Court of Justice and Its Review of the Compatibility of General Measures With the Protection of Economic Rights and Freedoms
Albertina Albors-Llorens
14.
Union Law and Final Decisions of National Courts in the Recent Case Law of the Court of Justice
Antonio Tizzano and Bruno Gencarelli
PART III: EUROPEAN SUBSTANTIVE LAW
15.
The Struggle for EU Citizenship: Why Solidarity Matters
Malcolm Ross
16.
Social Solidarity and Social Security
Robin CA White
17.
Social Policy and the Shifting Sands of the Constitutional Order: The Case of Posted Workers
Catherine Barnard
18.
EU Criminal Law—the Present and the Future?
John R Spencer
19.
Free Movement of Goods and Pre-emption of State Power
Laurence W Gormley
20.
The Past, Present and Future of Competition Law in the European Union
Piet Jan Slot
21.
The Future Shape of EU Energy Law and Policy
Angus Johnston
22.
The Role of National Judges in Implementing Uniform Rules of Jurisdiction and Choice of Law in the European Union
Richard Plender
PART IV: EUROPE IN THE WIDER WORLD
23.
Member States as Trustees of the Union Interest: Participating in International Agreements on Behalf of the European Union
Marise Cremona
24.
The 'Succession Doctrine' and the European Union
Robert Schütze
25.
Enlarging the Constitutional Order of States
Christophe Hillion
26.
Very Small States and the European Union: the Case of Liechtenstein
Marc Maresceau
27.
The Internal Legal Effects of the EU's International Agreements and the Protection of Individual Rights
Francis G Jacobs
28.
The Obligation of Member States to Foresee, in the Conclusion and Application of their International Agreements, Eventual Future Measures of the European Union
Joni Heliskoski
29.
Third Time Lucky: the Pre-history of the Common Security and Defence Policy
David Scannell
30.
The Nexus Between the European Union's Common Security and Defence Policy and Development
Panos Koutrakos
31.
The Role of the European Commission in Tackling Terrorism: the Example of Passenger Name Records
Jonathan Faull