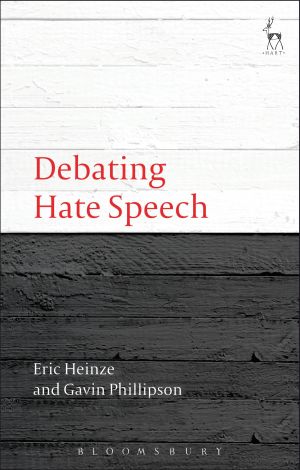 Does hate speech undermine democracy, by attacking its most vulnerable members? Does it threaten the equal dignity of all citizens? Or are democracy and equality degraded not by hateful expression, but by censorship? Do hate speech bans give governments too much control over thought and ideas, or do bans secure the conditions for ideas to be meaningfully debated? Should each society choose its own rules? Or are some principles of free expression universal? Whom should hate speech bans protect: racial and ethnic groups, religious communities, women, sexual minorities, the disabled? Should we ban hateful words and images in public spaces but not on the internet? Heinze and Phillipson draw on law, politics, philosophy and ethics to debate these questions.

For Phillipson, narrowly drawn hate speech bans are essential to the social contracta prerequisite for democratic deliberation, and a symbolic protection of every citizen's basic dignity. Heinze replies that punitive rules imposed to silence hateful views damage democracy, and governments have more legitimate and effective means of combating harmful speech. Drawing upon European, American and Commonwealth perspectives, this book will be of interest not only to lawyers, but also to readers in philosophy, politics and journalism.