Judging Europe's Judges: The Legitimacy of the Case Law of the European Court of Justice Examined 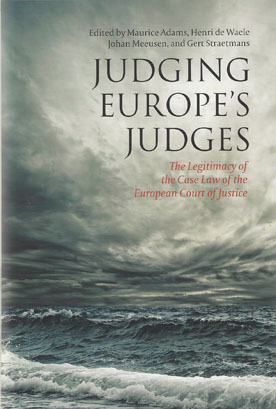 After successive waves of EU enlargement, and pursuant to the entry into force of the Lisbon Treaty, the European Court of Justice finds itself at the brink of a new era.

Both the institution itself and the broader setting within which it operates have become more heterogeneous than ever before. As a consequence the issues now arriving on its docket are also often of dazzling complexity, covering an unprecedented number of fields.

The aims of this volume are to study the impact of these developments, examine the legitimacy of the Court's output in this novel context and provide a systemic appraisal of its overall performance. In doing so, specific attention is paid to its most recent case law on four topics: the general principles of EU law, external relations, the internal market and Union citizenship.

Contents:
Introduction: Judging Europe's Judges Maurice Adams, Henri de Waele, Johan Meeusen and Gert Straetmans
1. The Court's Outer and Inner Selves: Exploring the External and Internal Legitimacy of the European Court of Justice Koen Lenaerts
2. Adjudication by Reference to General Principles of EU Law: A Second Look at the Mangold Case Law Jan Mazak and Martin Moser
3. The Court's Case Law on the Internal Market: 'A Circumloquacious Statement of the Result, Rather than a Reason for Arriving at It'? Stephen Weatherill
4. The Legitimacy of Free Movement Case Law: Process and Substance Jukka Snell
5. The Bubble that Burst: Exploring the Legitimacy of the Case Law on the Free Movement of Union Citizens Michael Dougan
6. Towards 'Real' Citizenship? The Judicial Construction of Union Citizenship and its Limits Daniel Thym
7. Placing the European Union in International Context: Legitimacy of the Case Law Eileen Denza
8. Of Feasibility and Silent Elephants: The Legitimacy of the Court of Justice through the Eyes of National Courts Michal Bobek Epilogue: Judging the Judges - Apology and Critique JHH Weiler