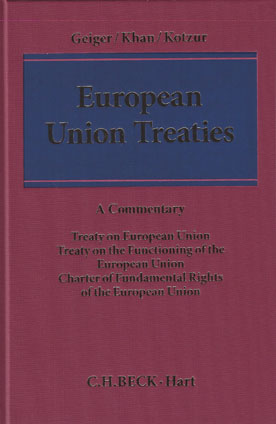 This is the new English edition of a Commentary on the basic European Treaties which has already been very successfully published in five earlier editions in German.

It comprises concise article-by-article commentaries on the most recent versions of the Treaty on European Union and the Treaty on the Functioning of the EU, supplemented by the Charter of Fundamental Rights (including the comments of the European Convention's Presidency) and the Treaty Protocols.

The authors, all of them specialists on European law, provide a compact overview of the European primary law and also refer to the relevant secondary law. Each commentary contains an introduction to the particular legal area at issue and gives particular importance to the current case law of the European Court of Justice.

Announced as Commentary on the TEU/TFEU