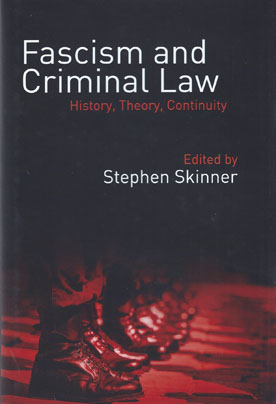 Fascism has been described as 'the major political innovation of the twentieth century, and the source of much of its pain'.

Brutal, repressive and in some cases totalitarian, the fascist and authoritarian regimes of the early twentieth century, in Europe and beyond, sought to create revolutionary new orders that crushed their opponents. A central component of such regimes' exertion of control was criminal law, a focal point and key instrument of State punitive and repressive power.

This collection brings together a range of original essays by international experts in the field to explore questions of criminal law under Italian Fascism and other similar regimes, including Franco's Spain and inter-war Romania and Japan. Addressing issues of substantive criminal law, the form and function of criminal justice institutions, and the role and perception of criminal law in processes of transition, the collection casts new light on fascism's criminal legal history, and related questions of theoretical interpretation and historiography.

At the heart of the collection is the problematic issue of continuity and similarity among fascist systems and preceding, contemporaneous and subsequent legal orders, an issue that goes to the heart of fascist regimes' historical identity and the complex relationship between them and the legal orders constructed in their aftermath. The collection thus makes an innovative contribution both to the comparative understanding of fascism, and to critical engagement with the foundations and modalities of criminal law across systems.

Contents:
Introduction
Fascism and Criminal Law, ‘One of the Greatest Attributes of Sovereignty’
I Criminal Law and Italian Fascism
1.
The Shadow of the Law: the Special Tribunal for the Defence of the
State between Justice and Politics in the Italian Fascist Period
2.
The Positivist School of Criminology and Italian Fascist Criminal Law:
a Squandered Legacy?
3.
Fascist by Name, Fascist by Nature? The 1930 Italian Penal Code in
A cademic Commentary, 1928–46
4.
Criminal Law, Racial Law, Fascist Law: Was the Fascist Era Really a
‘Parenthesis’ for the Italian Legal System?
II Criminal Law, Fascism and Authoritarianism in Romania, Spain, Brazil and
Japan
5.
The Enemy Within: Criminal Law and Ideology in Interwar Romania
6.
Criminal Law under the Francoist Regime: the Influence of
Militarism and National-Catholicism
7.
When Law and Prerogatives Blend: Generic Fascism in Getulio Vargas’s
Brazil, 1930–45
8.
Facilitating Fascism? The Japanese Peace Preservation Act and
the Role of the Judiciary