The Law and Practice of Expulsion and Exclusion from the United Kingdom: Deportation, Removal, Exclusion and Deprivation of Citizenship 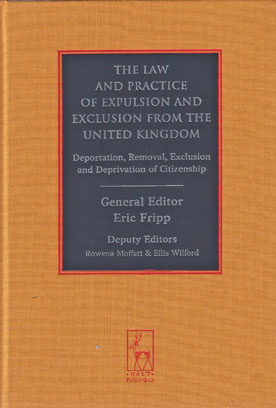 Resort by the state to measures of exclusion and expulsion from the territory of the United Kingdom and/or from British citizenship have multiplied over the past decade, following the so-called 'war on terror', increased globalisation, and the growing politicization of national policies concerning immigration and citizenship.

This book, which focusses on the law and practice governing deportation, removal and exclusion from the United Kingdom, the refusal of naturalisation, and deprivation of British citizenship, represents the first attempt by practitioners to assess the law and practice in these areas as a cohesive area of state activity.

The undertaking is a vital one because, whilst these areas of law and practice have long existed as the hard edge of immigration and nationality laws, in recent years they have expanded beyond secondary existence as mere mechanisms of enforcement. The body of law, practice and policy created by this process is one which justifies treatment as a primary concern for public lawyers.

The book provides a comprehensive analysis of the law in these areas. This involves a consideration of interlocking international and regional rights instruments, European Union law and the domestic regime. It is a clear and comprehensive every-day guide for practitioners, and offers an invaluable insight into likely developments in this dynamic area of public law.