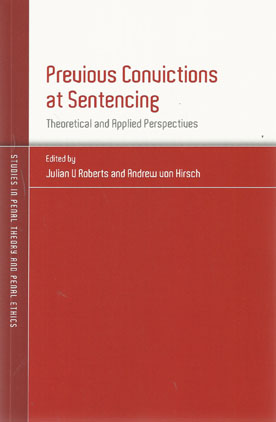 This latest volume in the Penal Theory and Penal Ethics series addresses one of the oldest and most contested questions in the field of criminal sentencing: should an offender's previous convictions affect the sentence, and how?

This question provokes a series of others: Is it possible to justify a discount for first offenders within a retributive sentencing framework? How should previous convictions enter into the sentencing equation? At what point should prior misconduct cease to count for the purposes of fresh sentencing? Should similar previous convictions count more than convictions unrelated to the current offence? Statutory sentencing regimes around the world incorporate provisions which mandate harsher treatment of repeat offenders.

Although there is an extensive literature on the definition and use of criminal history information, the emphasis here, as befits a volume in the series, is on the theoretical and normative aspects of considering previous convictions at sentencing.

Several authors explore the theory underlying the practice of mitigating the punishments for first offenders, while others put forth arguments for enhancing sentences for recidivists. The practice of sentencing repeat offenders in two jurisdictions (England and Wales, and Sweden) is also examined in detail.