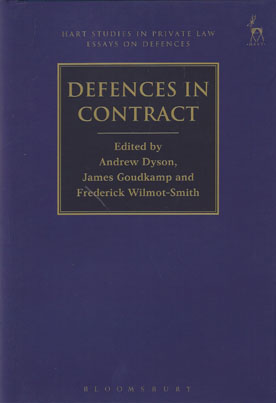 This book is the third in a series of essay collections on defences in private law. It addresses defences to liability arising in contract.

The essays range from those that adopt a predominantly black-letter approach to others that examine the law from a more theoretical or historical perspective. Some essays focus on individual defences, while some are concerned with the links between defences, or with how defences relate to the structure of contract law generally.

One goal of the book is to shed light on contract law doctrines by analysing them through the lens of defences. Many scholars are unaccustomed to conceptualising principles of contract law in terms of defences and so a new perspective is brought to an old topic.

The essays make several original contributions to this complex, important but neglected field of academic enquiry. The contributors - judges and academics - are all leading jurists. The essays are addressed to all of the major common law jurisdictions.

Contents:
1. Thinking in Terms of Contract Defences Andrew Dyson, James Goudkamp and Frederick Wilmot-Smith
2. What Is a Contractual Defence (and Does It Matter)? Kit Barker
3. Good Faith Bargaining in the Shadow of a Form Daniel Markovits
4. Good Faith, Good Conscience, and the Taking of Unfair Advantage Stephen Waddams
5. Undue Influence and Unconscionability Hugh Beale
6. Should Consideration Be Required for the Consensual Discharge of an Agreement By Part Payment? Mary Arden
7. Not Waiving but Drowning Robert Stevens
8. Frustration: Automatic Discharge of Both Parties? Ewan McKendrick
9. Resisting Termination: Some Comparative Observations Solene Rowan
10. The Contract Remoteness Rule: Exclusion, Not Assumption of Responsibility Venkatesan Niranjan
11. Contributory Negligence and Strict Contractual Obligations Revisited Janet O'Sullivan
12. The Impact of Exemption Clauses and Disclaimers: Construction, Contractual Estoppel and Public Policy Gerard McMeel
13. Illegality: Where Are We Now? Roger Toulson