This book is now Out of Print.
A new edition has been published, the details can be seen here:
Australian Anti-Discrimination Law 2nd ed isbn 9781862879102 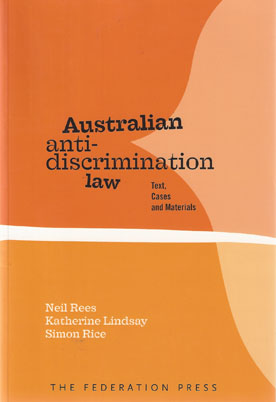 All of the major grounds of unlawful discrimination, such as race, sex and disability, are considered in detail. The book records the history of the major pieces of anti-discrimination legislation and it includes numerous suggestions for reform. While the book deals systematically and critically with all aspect of anti-discrimination law, such as grounds, areas of activity, exceptions, procedure, and remedies, it also contains extensive materials dealing with the policy goals of the law.

The central chapter in the book is devoted to the concept of unlawful discrimination. All of the major High Court decisions concerning the notions of direct and indirect discrimination are extracted, explained and analysed. The chapter also contains a useful overview of the international history of these concepts, with references to leading US and UK cases.

The book will be of interest to practitioners as well as students, especially as there are comprehensive chapters in the areas of procedure and remedies. Each chapter contains problems for students.