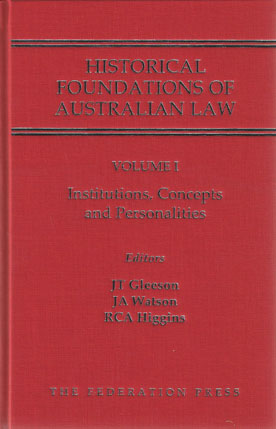 Justice McHugh once said that a lack of understanding of legal history was a misfortune, not a privilege. That was an understatement. As well as being essential for any Australian lawyer, the history underlying and informing the Australian legal system is a uniquely interesting amalgam of English, American and local developments.

The two volumes of Historical Foundations of Australian Law set the very highest standards of analysis and scholarship. Each is introduced by a useful and perceptive commentary by James Watson. Together, they contain 31 essays by distinguished judges and practitioners and academics.

Although each essay is self-contained, in combination they yield a rich analysis of how Australian law has reached its present state. The first volume, Institutions, Concepts and Personalities, contains incisive assessments of key figures such as Sir Owen Dixon and Justice Joseph Story (by Justices Hayne and Allsop respectively), and of key developments such as the establishment of an Australian land law, the reception of the common law, the growth to nationhood, the changing role of precedent and the separation of powers.

There are essays on the very early influences on Australian law from the leading early texts (Glanvill and Bracton), from early English statutes and from Roman law. There are essays on the growth of equity, and even a modern dialogue on the Judicature legislation. And there are accounts of legal procedure, which is ultimately the source of much substantive law, and of the jurisprudential figures who have sought to analyse law.

The second volume, Commercial Common Law, complements the first: distinguished judges, practitioners and academics write on many aspects of commercial practice, often viewed through more than one prism. Thus there are chapters on money and bills of exchange, and cheques and banking, and on the actions often associated with them (notably debt and conversion), and on Lord Mansfield's contribution to commercial law. There are chapters on how the basic elements of the law of torts and contract came into existence, from a variety of perspectives.

There are analyses of privilege, defamation, assignment and implied terms. There are chapters on corporations, agency and insolvency, and a notable one on restitution (by Ian Jackman SC) that poses a challenge to thinking which has become orthodox outside Australia.