Lives of the Judges: Jessel, Cairns, Bowen and Bramwell 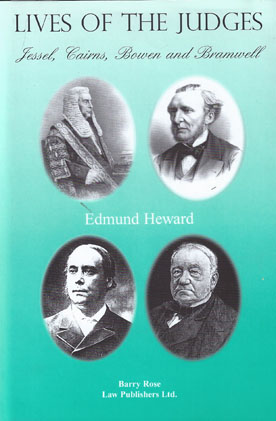 All four belonged to the 19th Century: two (Jessel and Cairns) were also Members of Parliament - but all made different contributions to various areas of the law. Each one of Heward's subjects makes interesting reading: Jessel, for example, was the subject of an apparent assassination attempt - but although he had been deafened by this in one ear, apart from writing a reassuring letter to his wife, he proceeded to his usual task of presiding in court.

Cairns was said to be of all the members of Disraeli's two cabinets, which included him, the one whom he trusted most. Twice he became Lord Chancellor - the second time in 1874 (incidentally, as the author informs' us, when the Lord Chancellor had virtually no staff).

Lord Bowen was not only the possessor of a superb intellect, but was also a good sportsman and wit. Involved in the Tichbome Claimant case, he acted for the claimant - it was not before the 70th day that he concluded his case; his friends thought that the mental stress on Bowen was tremendous and it seriously undermined his constitution and probably did him irreparable harm. Following his appointment as a Judge at the age of 45, with regret he gave up his practice at the Bar and abandoned his ambitions for a career in Parliament.

Bramwell was said to be one of the most popular members of the Bar as a result of his kindness and sense of humour. An interesting man, the author shows his diverse talents, including a small section entitled 'Bramwelliana' - a collection of pieces showing his thoughts and wit.

All in all, Edmund Heward has produced a book which is most certainly not dull, but one likely to pleasantly inform the reader about four outstanding Victorians who contributed so much to the Legal Service

Subjects:
Biography, Biography (Out of Print)