This book is now Out of Print.
A new edition has been published, the details can be seen here:
Defending Suspects at Police Stations: The Practitioner's Guide to Advice and Representation 7th ed isbn 9781908407849 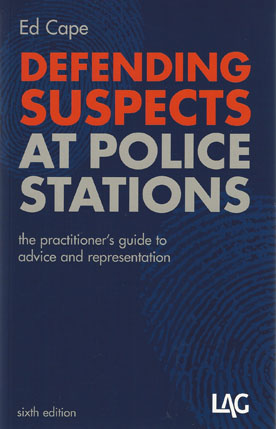 
Ed Cape’s authoritative guidance is unrivalled. Comprehensive yet highly accessible and practical, Ed Cape provides the answers to everyday practical questions and problems. Initial chapters explain the basic principles of defending clients at the investigative stage and examine the key provisions of PACE and the Codes of Practice.

The book includes dedicated chapters on advising and assisting vulnerable clients, and on enforcement of the PACE and Code provisions. It also contains expert guidance on immigration detainees and the complex and unfamiliar aspects of immigration law that apply.

The sixth edition includes an up to date version of PACE (including changes made by the Police (Detention and Bail) Act 2011) and a full set of the most recent versions of the PACE Codes. There is a wealth of checklists, specimen letters, sample statements and forms as well as boxed summaries in each chapter so vital information can be seen at a glance.

With the challenges presented by cuts to the criminal legal aid budget, fixed fees and the possible introduction of a means and merits test for police station legal aid, ready access to all the up to date information needed by the police station adviser has never been more important.

The sixth edition of Defending Suspects covers major changes to legislation, case-law and practice including:-