Fine Lines and Distinctions: Murder, Manslaughter and the Unlawful Taking of Human Life 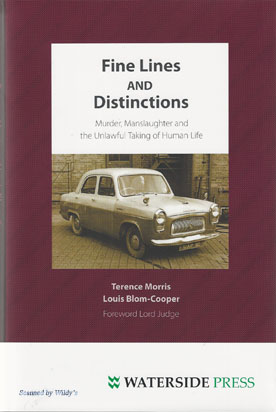 A most powerful commentary on the law of murder (and other unlawful killings), its history, modern-day development, wholesale deficiencies and unjust penal consequences.

This book by two of the UK's leading and most forthright commentators reappraises earlier acclaimed writings such as With Malice Aforethought: A Study of the Crime and Punishment for Homicide (2004), Hart Publishing.

It examines and puts forward what Lord Judge in his Foreword describes as 'trenchant views' on correcting two particular strands of deficiency: the present definition of murder and the penalty for that offence. It will be of importance to lawyers, academics, students and others wishing to better understand these key issues at a time of change: a definitive account of the most serious offence in the criminal calendar and the impact of the mandatory sentence of life imprisonment for murder on some 8,000 serving prisoners.

At a time when the Law Commission has suggested a division of murder into two categories, with manslaughter remaining, and a review of sentencing as a whole is imminent, the book focuses on earlier lamentable failures to deal with the problems of definition and sentencing which began with the Homicide Act 1957 and were not addressed at the time of the abolition of capital punishment a decade later.

Taking as a main focus the extraordinarily controversial decision of the House of Lords in the case of DPP v Smith (1960), the book contains fresh insights based on a close study of that and the earlier case of R v Hedley and Jenkins (1945). The authors demonstrate how -largely hidden from public view - politics, law-making, judicial decision-making and myth somehow became intertwined in a way that would now be unacceptable in a more transparent, rights conscious and informed age.

As Lord Parker, Lord Chief Justice stated in the debate in the House of Lords at the time of the abolition of the death penalty, 'I dislike fine lines and technical distinctions'. Yet as Lord Mustill began a judgment in the Judicial Committee of that same House as late as 1998 (Attorney-Generals' Reference No.3 of 1994), the law of homicide: