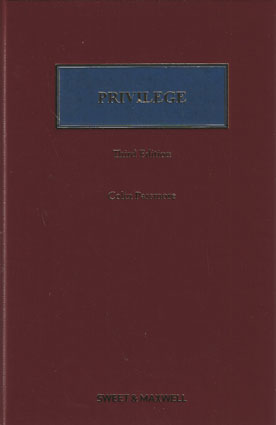 The scope of the two main heads of privilege have only recently been settled by the Courts, notwithstanding that privilege can be traced back many hundreds of years.

With the Three Rivers case, the position is now clearer as the author describes in the new edition of this, the leading work on the subject, which examines privilege in all its aspects in terms which will appeal to the practitioner and academic alike.

If ever there were circumstances in which the English courts might have been taken the opportunity to rein in the importance or scope of legal professional privilege, then this was provided by both Derby Magistrates and Three Rivers No (6).

That on both occasions, and in the intervening opportunities provided by the appeals in Daly and Morgan Grenfell, the House of Lords has consistently affirmed the policy justification for legal advice privilege removes any doubt as to its high and now unchallengeable - importance in English law as a substantive right that prevails, save in the face of the clearest statutory abrogation, over all other public interests.

Key features of the new edition:-

Key contents:- The author's explanation of the subject is both detailed and analytical, providing the reader with a definitive, comprehensive and expertly written account.