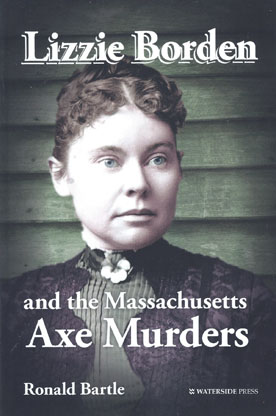 Having been acquitted of the axe murders of both her parents, Borden then returned home and carried on as before only to be roundly ostracised by the stoutly religious local community. Prosecutors never charged anyone else. Here, author Ronald Bartle revisits events in Fall River, Massachusetts in 1892. He explains how her answers to police questions were at times strange and contradictory and her accounts often bizarre.

With so many pointers to her involvement in the killings her trial has been compared to that of O J Simpson in the modern day. Whatever the justice of the situation, no-one wanted to see a woman hanged. The case is immortalised in legal folklore as well as the children's skipping rhyme:-

Lizzie Borden took an axe And gave her mother forty whacks. When she saw what she had done, She gave her father forty-one.

A refreshing account of a very famous case. Contains legal and other analysis. A fly-on-the-wall view of the nineteenth century USA justice system. A true story that reads like a thriller.

Contents:
1.The Case Against Lizzie Borden
2.The Background
3.Before the Holocaust
4.Lizzie's Visit to Alice
5.The Inquest
6.The Scene is Set
7.The Murder of Abby Borden
8.The Murder of Andrew Borden
9.The Evidence of Hannah Reagan
10.The Blood Mystery
11.The Murder Weapon
12.The Burning of a Dress
13.The Alibi
14.The Exclusion of the Inquest Evidence
15.The Exclusion of the Prussic Acid Evidence
16.Lizzie's Failure to Give Evidence
17.Closing Speeches and Charge to the Jury
18.The Conclusion. Select Bibliography. Index.