The Ouija Board Jurors: Mystery, Mischief and Misery in the Jury System 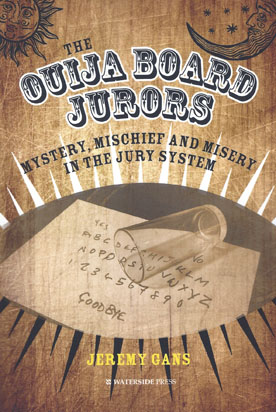 The Ouija board jury incident of 1994 is one of the most disconcerting in English legal history, possibly (says the author) ‘the nadir of reported juror misbehaviour in the 20th-century’. But, as Professor Jeremy Gans shows, in an era of soundbites it has been distorted by the media whilst even eminent lawyers have sometimes got the story wrong.

In this first full-length treatment he emphasises the known facts, the constitutional dilemma of investigating even bizarre jury misbehaviour and how the trial involved one of the most serious murder cases of the decade in which two people were shot in cold blood. Stephen Young’s conviction after a re-trial is still claimed to be a miscarriage of justice by some people, as to which Gans puts forward his own ingenious solution.

But quite apart from analysing the facts of R v Young, this book is a tour de force on jury misbehaviour in which the author also examines the implications for example of winks and nods, research by jurors, speaking or listening out of turn, going to sleep during the hearing or falling in love with one of the advocates.

Amusing at first sight, such events involve deep questions of law, practice and democratic involvement in the Criminal Justice process. Far from being a mere anecdote, the case of the Ouija board jurors, the misconceptions about it and the issues it leads to deserve close study by anyone who is even remotely interested in jury trial.

The first full length treatment of an iconic case. Dispels the myths that have built-up around it. Looks at other instances of jury misbehaviour. Shows how the courts and Parliament have wrestled with problems of this kind. A first-rate analysis of a baffling double murder.