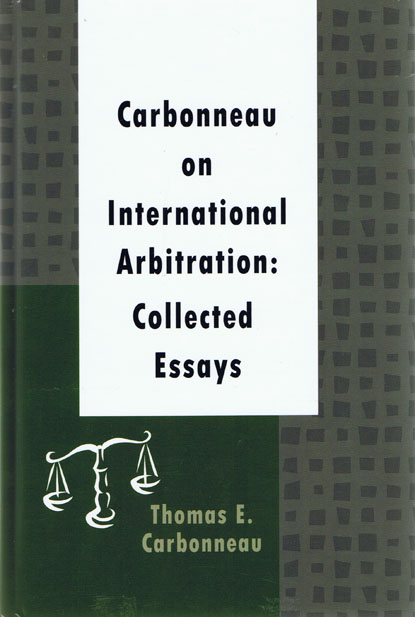 The chapters of this volume represent the majority of Professor Carbonneau’s scholarly writings on the subject of international commercial arbitration (ICA). They reflect his interest over the course of thirty years of law-teaching in international litigation, comparative law, and-of course - international arbitration.

Some of the chapters are of a recent vintage, while others were written a decade or two ago. Whatever their date of production, the chapters have a continuing professional interest. Each of them addresses some of the major issues of trans-border arbitration law.

A number of chapters emphasize the importance of courts in developing and maintaining a legal culture that is hospitable to arbitration. The work of the courts has been instrumental to the reception of arbitration in the United States and in several European jurisdictions. The courts can “make or break” arbitration by upholding arbitration agreements and enforcing arbitral awards.

Other chapters underscore that arbitration can operate as a complete legal system. It not only provides workable trial procedures, but arbitrators can also create law in their rulings. With the addition of an internal arbitral appellate mechanism, arbitrations can function with almost absolute independence. The world law on arbitrations seems to favor the “a-national” and “a-juridical” operation of the arbitral process.

A few of the chapters recognize that arbitration is being increasingly employed to resolve political or mixed political and commercial disputes. Investment arbitration and BITs are the most recent expression of this development; it had been apparent in WTO and NAFTA dispute resolution. The Iran-U.S. Claims Tribunal presented the first great occasion for assessing the vocation of arbitration in a mixed dispute situation. While arbitration has made significant inroads in this area, political sovereignty remains resistant to the imposition of limitations. In many less visible “political” cases, determinations are nonetheless made and rendered enforceable.

The concluding chapters address more specific developments in the field of ICA. A number of cases point to the strong, perhaps overweening, support of the judiciary for arbitration. The courts in some jurisdictions support arbitration unequivocally and are bent upon a single outcome no matter the impact on doctrine. Lawyer presence in the arbitral process has lead to increased formalization in some proceedings. The “judicialization” of arbitration tilts the process toward the protection of rights and hinders its ability to function effectively and reach finality. Lawyers can readily misunderstand and undermine the gravamen of arbitration.

The concluding chapters also establish that the UK Arbitration Act 1996 is one of the world’s outstanding arbitration statutes. It rivals and bests the UNCITRAL Model Law on ICA and is the equal of the French codified law on arbitration. Finally, the express text of the New York Arbitration Convention appears to have been altered significantly by court practice. The possible limitations of national law have been neutralized and the provisions of the Convention articulate a truly trans-border regulation of the enforcement of awards.

In sum, the chapters in this book reflect the author's lifetime work in the area of international arbitration and are required reading for all those in the practicing in the field- law students, arbitrators, academics and practicing lawyers.