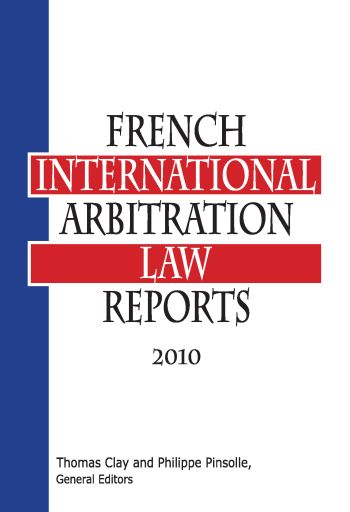 The case law of 2010 comes at the eve of a major event. Indeed, a few days after the end of the year, on 13 January 2011, French law of domestic and international arbitration was overhauled by a decree which replaced the applicable provisions in the Code of Civil Procedure. Yet it would be wrong to believe that the case law of the year 2010 is obsolete, firstly because many of the solutions of future law can only be as a result of the continuation of the state of the previous law; secondly, due to the principles of transitional law, the pre-2011 regime will be relied upon for many years, including for all arbitration agreements concluded before the entry into force of the new text, but enforced after. 2010 is thus the most up to date of the pre-2011 law. For this reason alone, it deserves to be explored.

However, many other reasons justify that the case law of 2010 be the subject of an exhaustive survey in the fourth volume of these French International Arbitration Law Reports. Among the many decisions in 2010, the major advances in the case law can be grouped into three categories: the first concerns the arbitration agreement; the second concerns the arbitrator; and the third concerns procedure.

First, regarding the arbitration agreement, in 2010, French case law again stated that it was a mobile legal object, which circulates with the main contract, and even more generally with the object of the legal action. In two judgments reproduced in this book, the Cour de Cassation stated that in a chain of contracts related to property, the arbitration clause is transmitted automatically to subsequent purchasers of the property, which was in this case a cow (the Blonde génétique case) because it is an accessory of the right of action, which itself is an accessory to a transmitted substantive law passed without any type of homogeneous or heterogeneous incident (the Refcom case). The arbitration clause is therefore viscerally attached to the rights passed on, beyond just the contract, and this is also what justifies its autonomy.

If the arbitrator managed to escape with respect to the receptum arbitrii, this is not the case with respect to independence, where an arbitrator was criticized for having concealed his ties, not with a party but with a party’s counsel (the Consorts Allaire case). Picking up from an old but often forgotten case (Paris, 12 Jan. 1999, the Milan Presse SA Case), this judgment is a milestone in terms of an arbitrator’s duty of disclosure, since it now extends to past links with counsel. The practice has since also followed this direction, reinforcing the movement for transparency with respect to the relationships of the players in an arbitration.

Finally, regarding procedure, 2010 saw changes in arbitral proceedings as well as in post-arbitral proceedings, that is to say in terms of annulment proceedings. The arbitration procedure was first marked by a strengthening of the application of the adversarial principle. Two emblematic cases overturned awards rendered by experienced arbitrators. In the first case, the award was rejected because it was based on loss of opportunity, not lost profit as claimed by the parties (the Caribbean Nickel Case). In the second case, the award was based on articles of the Egyptian Civil Code that had not been discussed by the parties, even though Egyptian law was applicable (the Malincorp Case). These decisions show greater salience of the appeal judge on the enforcement of the adversarial principle.

So we will not be surprised, then, that, in the post-arbitration phase, the Cour de Cassation has also asserted a broad conception of its power on the issue of the jurisdiction of the arbitral tribunal. The Abela Case of 6 October 2010 states clearly that the annulment judge must seek “all the legal and factual elements enabling it to interpret the scope of the arbitration clause and to conclude on the arbitrators’ compliance with their mission.” This formula was taken from a very old case; (Cass. 1st civ., Jan. 6, 1987, the Plateau des Pyramides Case) a case was believed to be buried in the sand, but which resurfaced in 2010. This underlines that, with respect to the jurisdiction or lack thereof of the arbitral tribunal, the judge intends to exercise broad authority, which is not the case with respect to other heads of annulment for which the French judge distances himself, even holding the arbitrator at the same level as a judge, which is in line with the French autonomous conception of international arbitration.