The Art of Judicial Reasoning: Festschrift in Honour of Carl Baudenbacher 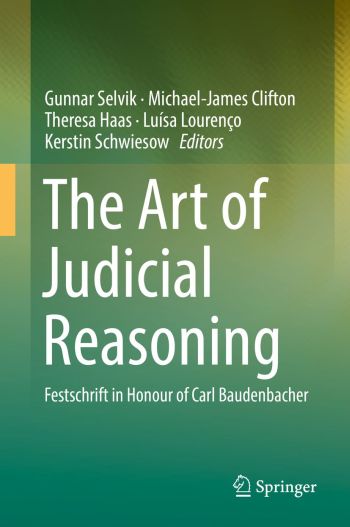 This book, formed as a series of essays in honour of Professor Carl Baudenbacher, addresses the very art of judicial reasoning, and features contributions from many of the foremost current or former national, supranational, or international judges.

This unique volume is intended first and foremost for legal scholars, but its approachable style makes it readily accessible for students and for those with a general interest in the application of the law and justice in today's multi-layered world. The collection of essays is rather more philosophical and reflective as opposed to doctrinal. Each contribution focuses on the nature and operation of justice, the independence of the judiciary, and on judicial style primarily from the perspective of the judges themselves.

The book provides perspectives on what it means to be accountable and independent as a judge, the role of language and languages in the quest for justice, while other contributions acquaint readers with the some of the structures of courts themselves, or indeed question for whom judgments are written. Each chapter has been written by a presiding judge, or head of an institution and the book is divided into three parts: - Part I Art and Method - Part II Justice and the Judiciary - Part III Reasoning and Language(s).