Speaking in Court: Developments in Court Advocacy from the Seventeenth to the Twenty-First Century 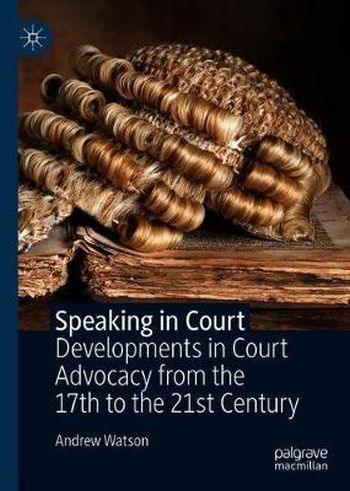 This book maps the changes in court advocacy in England and Wales over the last three centuries. Advocacy, the means by which a barrister puts their client's case to the court and jury, has grown piecemeal and at an uneven pace; the result of a complex interplay of many influences.

Andrew Watson examines the numerous principal factors, from the effect on juniors of successful styles deployed by senior advocates, changes in court procedure, reforms in laws determining who and what may be put before courts, the amount of media reporting of court cases, and public and press opinion about the acceptable limits of advocates' tactics and oratory.

This book also explores the extent to which juries are used in trials and the social origins of those serving on them. It goes on to examine the formal teaching of advocacy which was only introduced comparatively recently, arguing that this, and new technology, will likely exert a strong influence on future forensic oratory. Speaking in Court provides a readable history of advocacy and the many factors that have shaped it, and takes a far wider view of the history of advocacy than many titles, analysing the 20th Century developments which are often overlooked.

This book will be of interest to general readers, law practitioners interested in how advocacy has developed in courts of yesteryear, teachers of advocacy who want to locate there subject in history and impart this to their students, and to law students curious about the origins of what they are learning.