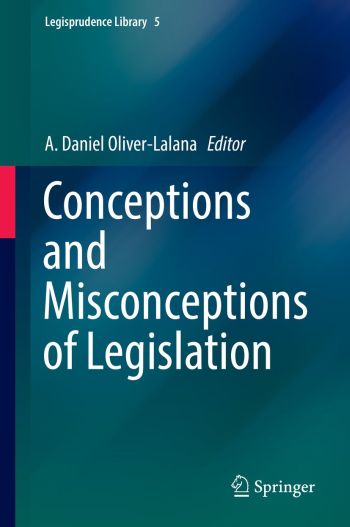 Edited by: A. Daniel Oliver-Lalana

This volume brings together an international group of legal scholars to discuss different approaches to lawmaking. As well as reflecting the diversity of legisprudence as a re-emerging academic field, it offers a broad overview of current developments and challenges in the theory of legislation, and aspires, moreover, to counterbalance some questionable ideas or misconceptions, widespread among jurists, on what making laws entails.

The book is organized into three parts. The first comprises a sample of ‘ways and models of legislation’, ranging from classic legislative ideals to contemporary forms of regulation. The essays in this part, variances of focus notwithstanding, revolve around the notions of legislative rationality, quality, effectiveness, and legitimacy, which may be regarded as the cornerstones of legisprudence. Interwoven with these notions is another core legisprudential concern: the justification of laws. We address it separately in the next part by exploring the connection between lawmaking, argumentation and constitutional democracy: under the heading ‘legislation in a culture of justification’, a number of aspects of this connection are tackled that have not been sufficiently considered so far in legisprudential literature, such as the intricacies of legislative reasoning and balancing, or the justificatory problems posed by special-interest legislation. The under privileged status of legisprudence in legal studies and the need for socially attentive and citizen-oriented legislative research come to the fore in the third part of the book which turns to the relationships between ‘legisprudence, lawyers, and citizens’. All in all, the thirteen articles gathered here provide a stimulating insight into the theory of legislation, and can hopefully contribute to the reconciliation of the study of law and the study of its making.