Borders, Legal Spaces and Territories in Contemporary International Law: Within and Beyond 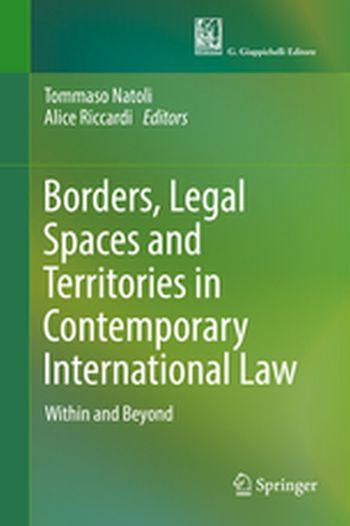 This book examines the challenges posed to contemporary international law by the shifting role of the border, which has recently re-emerged as a central issue in international relations. It posits that borders do not merely correspond to States' boundaries: indeed, while remaining a fundamental tool for asserting States' power, they are in fact a collection of constantly changing spatial limits.

Consequently, the book approaches borders as context-specific limits and revisits notions traditionally linked to them (jurisdiction, sovereignty, responsibility, individual rights), while also adopting the innovative approach of viewing borders as phenomena of both closedness and openness.

Accordingly, the first part of the book addresses what happens "within" borders, investigating the root causes of the emergence of spatial limits and re-assessing apparent extra-territorial assertions of State power. In turn, the second part not only explores typical borderless spaces, but also more generally considers the exercise of States' and international organisations' powers and prerogatives across or "beyond" borders.

Contents:
Alice Riccardi and Tommaso Natoli - Borders and International Law: Setting the stage
Part I Within the border: Marta Gionco - Access to social security for migrants in the European Union: Sedentarist biases between citizenship, residence and claims for a post-national society
Giulia Ciliberto - Non-refoulement in the eyes of the Strasbourg and Luxembourg courts: What room for its absoluteness?
Nicolo Nisi - The pillars of Heracles of European private international law: The frontiers with third states and Brexit
Stefano Saluzzo - The principle of territoriality in EU data protection law
Part II Beyond the border: Tommaso Natoli - Testing the analogy: The CoE - ECHR system pioneering human rights protection in the cyberspace
Paolo Turrini - The sky's not the limit: Legal bonds and boundaries in claiming sovereignty over celestial bodies
Luigi Prosperi - A bull in a China shop: The exercise of the ICC's jurisdiction over its territorial reach in situations involving non-party states
Alessandro Rosano - At the frontier: Values and borders in the EU's external relations