Inferences by Parallel Reasoning in Islamic Jurisprudence: Al-Shirazi's Insights into the Dialectical Constitution of Meaning and Knowledge 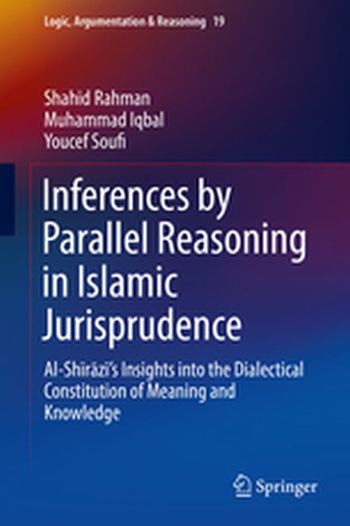 This monograph proposes a new (dialogical) way of studying the different forms of correlational inference, known in the Islamic jurisprudence as qiyas. According to the authors' view, qiyas represents an innovative and sophisticated form of dialectical reasoning that not only provides new epistemological insights into legal argumentation in general (including legal reasoning in Common and Civil Law) but also furnishes a fine-grained pattern for parallel reasoning which can be deployed in a wide range of problem-solving contexts and does not seem to reduce to the standard forms of analogical reasoning studied in contemporary philosophy of science and argumentation theory.

After an overview of the emergence of qiyas and of the work of al-Shirazi penned by Soufi Youcef, the authors discuss al-Shirazi's classification of correlational inferences of the occasioning factor (qiyas al-'illa).

The second part of the volume deliberates on the system of correlational inferences by indication and resemblance (qiyas al-dalala, qiyas al-shabah). The third part develops the main theoretical background of the authors' work, namely, the dialogical approach to Martin-Loef's Constructive Type Theory. The authors present this in a general form and independently of adaptations deployed in parts I and II. Part III also includes an appendix on the relevant notions of Constructive Type Theory, which has been extracted from an overview written by Ansten Klev.

The book concludes with some brief remarks on contemporary approaches to analogy in Common and Civil Law and also to parallel reasoning in general.

Contents:
INTRODUCTION: A Brief Historical Overview of the emergence of Qiyas within Islamic Jurisprudence and Some Notes on the Life and Work of Abu Ishaq al-Shirazi, by Soufi Youcef
I: QIYAS AL-'ILLA. Abu Ishaq al-Shirazi's System of Co-Relational Inferences of the Occasioning Factor: 1. Introduction 2. A Dialectical Genealogy of Abu Ishaq al-Shirazi's System of Qiyas 3. Motivating the Deployment of CTT 4. A Dialogical Framework for Co-Relational Inferences of the Occasioning Factor 5. Conclusions; Appendix I: Some basic notions of Constructive Type Theory Appendix
II: The main rules of the Dialogical framework for Qiyas al-'Illa References. QIYAS AL-DALALA AND QIYAS AL-SHABAH. Abu Ishaq al-Shirazi's System of Co-Relational Inferences by Indication and Resemblance: 1. Introduction. On al- Shirazi's Classification of Qiyas al-Dalala and Qiyas al-Shabah 2. Qiyas al-Dalala 3. Qiyas al-Shabah 4. The Dialectical Structure of Qiyas al-Dalala and Qiyas al-Shabah 5. A Dialogical Framework for Qiyas al-Dalala and Qiyas al-Shabah 6. Conclusions 7. References
III: IMMANENT REASONING AND THE DIALOGICAL CONSTITUTION OF LOGIC: 1. Introduction 2. Local Reasons 3. Strategic Reasons 4. A Plaidoyer for the Play-Level 5. Normativity and the Dialogical Framework 6. Conclusions 7.References
FINAL REMARKS AND THE WORK AHEAD