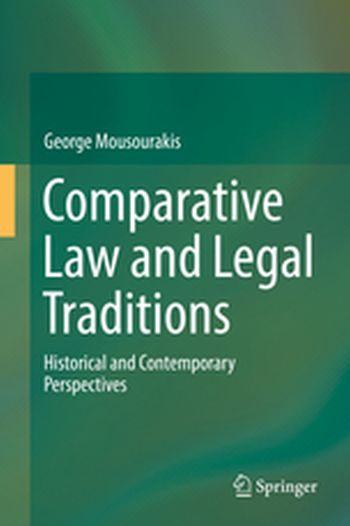 The primary aim of this book is to provide clear and reliable information on a number of central topics in comparative law. At a time when global society is increasingly mobile and legal life is internationalized, the role of comparative law is gaining importance. While the growing interest in this field may well be attributed to the dramatic increase in international legal transactions, this empirical parameter is only part of the explanation. The other part, and (at least) equally important, has to do with the expectation of gaining a deeper understanding of law as a social phenomenon and a fresh insight into the current state and future direction of one's own legal system. In response to the internationalization of legal practice and theory, law schools around the world have expanded their comparative law programs. Within the legal subjects that form the core of the curriculum there is a greater interest in comparative legal analysis, as well as greater attention to how global developments and international actors and institutions affect domestic law.

Transnational legal education based on comparative reasoning is intended to help shape a new generation of lawyers, public servants and other professionals who recognize and respect cultural diversity in an interconnected world. The central topics discussed in this book include: the nature and scope of comparative legal inquiries; the relationship of comparative law to other fields of legal study; the aims and uses of comparative law; the origins and historical development of comparative law; and the evolution and defining features of some of the world's predominant legal traditions. It also deals with selected theoretical aspects, such as the problem of comparability of legal events; the classification of legal systems into families of law; and the topics of legal transplants, harmonization and convergence of laws.

Chiefly intended for students, the book also discusses a number of fundamental issues concerning the development of comparative law, and devotes certain sections to reviewing the salient features of the relevant literature on definitional, terminological, methodological and historical issues.