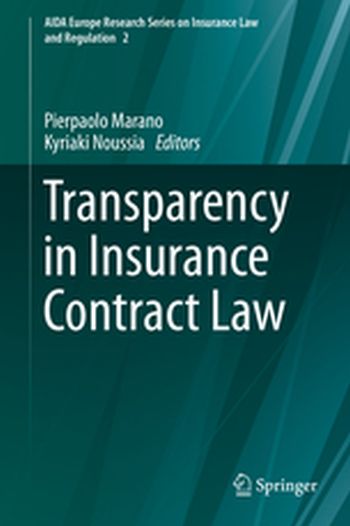 This Volume of the AIDA Europe Research Series on Insurance Law and Regulation focuses on transparency as the guiding principle of modern insurance law. It consists of chapters written by leaders in the respective field, who address transparency in a range of civil and common law jurisdictions, along with overview chapters. Each chapter reviews the transparency principles applicable in the jurisdiction discussed. Whether expressly or impliedly, all jurisdictions recognize a duty on the part of the insured to make a fair presentation of the risk when submitting a proposal for cover to the insurers, although there is little consensus on the scope of that duty. Disputed matters in this regard include: whether it is satisfied by honest answers to express questions, or whether there is a spontaneous duty of disclosure; whether facts relating to the insured's character, as opposed to the nature of the risk itself, are to be presented to the insurers; the role of insurance intermediaries in the placement process; and the remedy for breach of duty.

Transparency is, however, a much wider concept. Potential policyholders are in principle entitled to be made aware of the key terms of coverage and to be warned of hidden traps (such as conditions precedent, average clauses and excess provisions), but there are a range of different approaches. Some jurisdictions have adopted a "soft law" approach, using codes of practice for pre-contract disclosure, while other jurisdictions employ the rather nebulous duty of (utmost) good faith. Leaving aside placement, transparency is also demanded after the policy has been incepted. The insured is required to be transparent during the claims process. There is less consistency in national legislation regarding the implementation of transparency by insurers in the context of handling claims.