Rational Lawmaking Under Review: Legisprudence According to the German Federal Constitutional Court 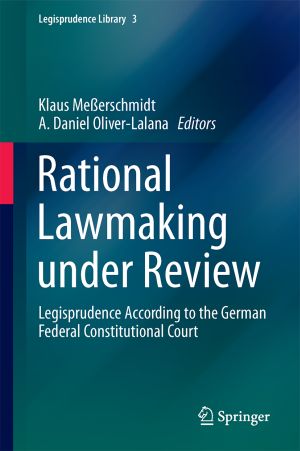 This book explores the constitutional, legally binding dimension to legisprudence in the light of the German Federal Constitutional Court's approach to rational lawmaking. Over the last decades this court has been remarkably active in applying legisprudential criteria and standards when reviewing parliamentary laws. It has thus supplied observers with a unique material to analyse the lawmakers' duty to legislate rationally, and to assess the virtues and drawbacks of this strand of judicial control in a constitutional democracy. By bringing together legislation experts and public law scholars to elaborate on 'legisprudence under review', this contributed volume aspires to shed light on the constitutionalisation of rational lawmaking as a controversial trend gaining ground in both national and international jurisdictions.

The book is divided into five parts. Part I frames the two key issues pervading the whole collection: the intricate relationship between judicial review and democracy, on the one hand, and the possibility of improving and rationalizing the task of legislation under the current circumstances of politics, on the other. Part II provides an overview of the judicial review of rational lawmaking, laying special emphasis on the duty of legislative justification imposed on lawmakers by the German Constitutional Court. Part III is devoted to the review of the systemic rationality of legislation, in particular to the requirements of legislative consistence and coherence as developed by this court. Contributions in Part IV revolve around the judicial scrutiny of the socio-empirical elements of rational lawmaking, with the control of legislative facts and impacts and the problem of symbolic laws being the central topics. Finally, Part V draws on the German case law to discuss the links between rational lawmaking, balancing and proportionality, and the interdependence between process review and substantive review of legislation.