Multilevel Protection of the Principle of Legality in Criminal Law 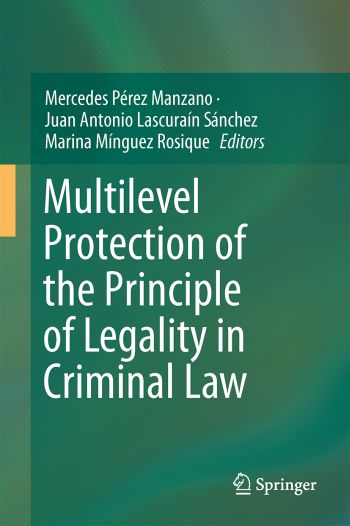 This book examines the simultaneous protection of fundamental rights by various norms and jurisdictional organs, focussing on the multilevel protection of the principle of legality in Criminal Law.

Written by accredited specialists in criminal law, constitutional law, international public law, and the philosophy of law, the majority of them ex-Counsels of the Spanish Constitutional Court, it addresses various manifestations of the principle of legality: the requirement of precision, the judicial subjection to law and the prohibition of bis in idem. It does so not only from a theoretical perspective, but also through a comparative study of the jurisdiction of the European Court of Human Rights, the Inter-American Court of Human Rights, the Court of Justice of the European Union and state constitutional courts. This practical approach characterizes the book, which culminates in a detailed analysis of the relevant ECtHR Judgement Del Rio Prada v. Spain on the retroactivity of unfavourable jurisprudence.

Multilevel protection of the principle of legality in Criminal Law is a useful instrument of reflection for scholars of both the principle of criminal legality and the problems that arise from the concurrency of protective jurisdictions of human rights.