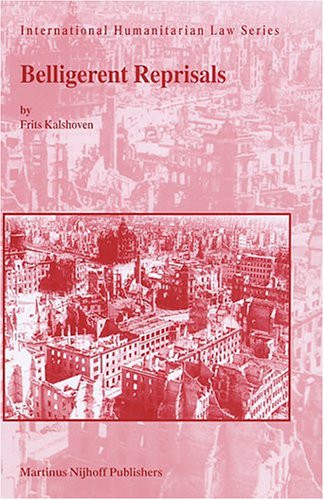 Belligerent Reprisals examines the historical developments in the law and practice relating to recourse to belligerent reprisals, as a (primitive) means of law enforcement in the hands of a party to an armed conflict, victim of a violation of the law of war at the hands of its enemy. As a legal concept, the notion means that the victim in turn violates a rule of the same body of the law of war, with the purpose of thus inducing the enemy to terminate its unlawful conduct. However, the enemy may in its turn denounce the so-called reprisal as an unlawful act of war and retaliate against it, thus setting in motion the ill-famed spiral of negative reciprocity.

While early lawmakers refrained from taking up the issue, prohibitions of reprisals could be achieved in conventions adopted in 1929 and 1949 on the protection of the power of the enemy. In contrast, reprisals (or retaliatory conduct announced under that title without meeting the requisite conditions) were common practice in the conduct of hostilities, with civilians in non-occupied territory as the main victims. With major governments disinclined to give up this tool, the ban on reprisals against civilian populations ultimately accepted in the Protocols of 1977 Additional to the Geneva Conventions of 1949 could only be hard-fought, and it remains contested to this day.

First published in 1971, Belligerent Reprisals has become a classic work on this complex topic. The analysis of lawmaking and state practice it contains is as valid today as it was in the late 1970’s, and elucidates the dilemmas inherent in the notion of belligerent reprisal, as a means of law enforcement that can go terribly wrong