Freedom of Expression and the Media 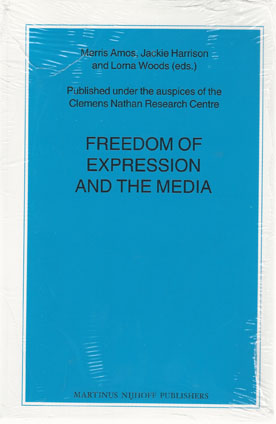 Freedom of expression – particularly freedom of speech – is, in most Western liberal democracies, a well accepted and long established, though contested constitutional right or principle.

Whilst based in ethical, rights-based and political theories such as those of: justice, the good life, personal autonomy, self determination, and welfare, as well as arrangements over legitimate government, pluralism and its limits, democracy and the extent and role of the state, there is always a lack of agreement over what precisely freedom of expression entails and how it should be applied.

For the purposes of this book we are concerned with freedom of expression and the media with regard to the current application of legal standards and self-regulation to journalistic practice. Justifications for freedom of expression do, in the end, inevitably involve the conduct of the media and it is this that concerns our authors.

This book is concerned with these issues as they affect the contemporary media, the practice of journalism and why imposed constraints and the extent of the freedoms attached to freedom of expression are managed, and why they may or may not be ultimately regarded as legitimate or not legitimate. It is the practical matter of contemporary journalism and freedom of expression that concerns us.

Consequently this is not a philosophical work so much as a work concerned with the way that freedom of expression is evoked and applied and those arguments that support or refute such evocation and application, focussing on areas of tension between freedom of expression and other considerations. In short, this is a book concerned with what the various authors regard as good practice as well as what they regard as problematic and why.

Most of the chapters in this book assume a UK regulatory framework; which, influenced by the EU requirements, imposes a differentiated burden on the broadcast media by comparison with the press and, to some degree, content on the Internet.