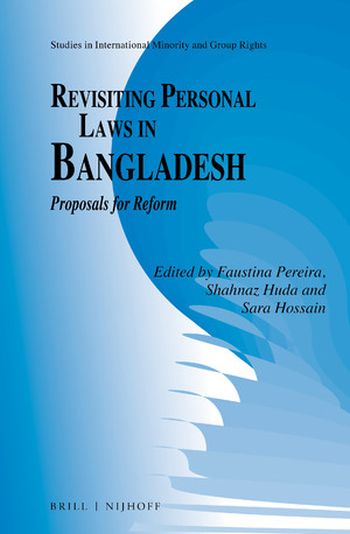 The People’s Republic of Bangladesh is centrally located in South Asia and is one of the eight countries that constitute the South Asian Association of Regional Cooperation (SAARC). In 2010, the South Asian Institute of Legal and Human Rights Studies in Dhaka (SAILS) initiated the ‘Combating Gender Injustice’ research study to investigate how the Christian, Hindu and Muslim communities in the country are affected by the laws and customs governing their personal lives.

The aim was to engage in a dialogue with the stakeholders the results of which would provide a basis to formulate recommendations for law, policy and procedural reform. These reports have been reproduced in this volume in updated and revised form. Moroever, in order to offer a more complete overview of the ethnic and religious minorities concerned, a chapter has been added on the personal laws of the Buddhist community, the third largest religious community in Bangladesh. Finally, the volume offers much needed information on the laws and customs of the Indigenous Peoples of the Chittagong Hill Tracts, communities following traditional rules and customs in the remote and hilly region of the country. The gender-sensitive personal laws prevalent in South Asian societies will continue to be debated for generations to come.

This unique volume gives a voice to the different religious communities affected by the current laws and practices in force in Bangladesh. The reader will find an overview and gain understanding of the legal issues that need to be addressed in each case.