The Rotterdam Rules 2008: Commentary to the United Nations Convention on Contracts for the International Carriage of Goods Wholly or Partly by Sea 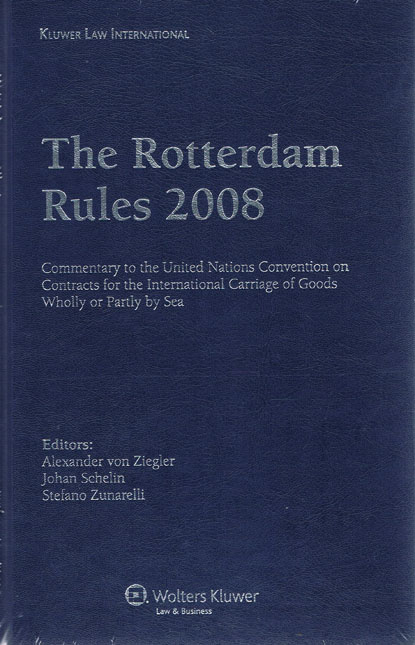 The 2008 UNCITRAL Convention, commonly known as the Rotterdam Rules promises to achieve the hitherto elusive goal of a legal unification of international transport contracts.

Its innovative set of rules accommodates such modern trade practices as those treating the carriage of goods by sea as part of wider door-to-door commercial transport operations and those relying on electronic commerce.

It closes many gaps in the existing international transport regime, thoroughly specifying the relation of transport documents to the rights and obligations between exporters and importers of goods, and clarifying the interests of credit and insurance in contracts of carriage.

This remarkable book, which will examine the Rotterdam Rules in depth, is edited and written by international lawyers intimately familiar with the negotiations leading to the Convention in finished form. It proceeds by a detailed analysis of each of the Convention’s 18 chapters in turn, in a clause-by-clause manner, drawing attention to interlinking implications throughout the document.

The book’s lucid insights and guidance are especially valuable in showing exactly how the Rules improve the existing international transport regime through its clearer and more complete regulation of such elements as the following:-

The authors provide a crystal-clear picture that allows the reader to appreciate the balanced way in which the interests of the various stakeholders are addressed by the Rules – the greater legal certainty for each party’s legal position, the freedom to extend the Rules by contract to the whole transport operation, the clear legal basis for the use of electronic transport records, and the flexibility with which the Rules have left room for evolving trade practices.

It will be of immeasurable value to practitioners and all parties interested in understanding how the new Convention operates and how the provisions are intended to be applied after the Convention comes into force.

Contents:
1. General Provisions
2. Scope of Application
3. Electronic Transport Records
4. Obligations of the Carrier
5. Liability of the Carrier for Loss, Damage or Delay
6. Additional Provisions Relating to Particular Stages of Carriage
7. Obligations of the Shipper to the Carrier
8. Transport Documents and Electronic Transport Records
9. Delivery of the Goods
10. Rights of the Controlling Party
11. Transfer of Rights
12. Limits of Liability
13. Time for Suit
14. Jurisdiction
15. Arbitration
16. Validity of Contractual Terms
17. Matters Not Governed by This Convention
18. Final Clauses
19. Conclusion
Appendix.