International Arbitration: The Coming of a New Age 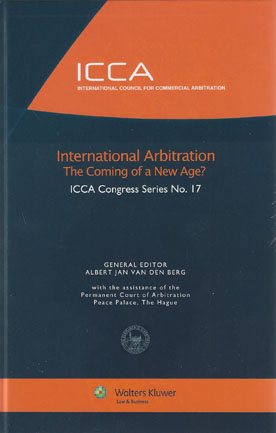 This volume collects the articles emanating from the twenty-first Congress of the International Council for Commercial Arbitration (ICCA) held in Singapore in 2012.

It opens with a thought-provoking keynote address on the present Golden Age of arbitration and its potential weaknesses and covers both practical and theoretical topics addressed by renowned arbitration practitioners and scholars.

Two principal themes are addressed. The first deals with various aspects of the arbitration proceedings – from the agreement to arbitrate and the commencement of proceedings (with an introduction to i- and e-arbitration) to the evidence-collecting phase, the tribunal’s decision and the issue of legal and arbitration costs.

The second examines the interaction between legal orders and national courts and arbitration; the need for and role of ethical codes of behaviour; the balance between investment protection and “policy space”; the future of ICSID; and the role of technological tools in arbitration.

The volume closes with the report of a judicial debate among eleven senior judges addressing issues in the application of the 1958 New York Convention.

New Trends in the Development of International Commercial Arbitration and the Role of Arbitral and Other Institutions
Edited by: Pieter Sanders
ISBN 9789065441201
Published October 1985
Kluwer Law International
£177.00