This book is now Out of Print.
A new edition has been published, the details can be seen here:
Brexit: The Legal Implications isbn 9789041195401

Britain Alone: The Implications and Consequences of United Kingdom Exit from the EU 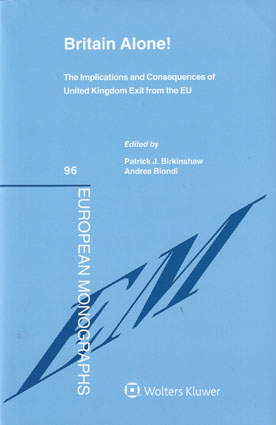 
Although the United Kingdom’s near half-century of EU membership has brought numerous indisputable benefits, anti-EU sentiment, simmering for decades, has now reached the point where an upcoming referendum could quite possibly lead to exit from the Union – an enormously topical issue dubbed Brexit.

This very timely book addresses the major concerns and uncertainties associated with this looming prospect. Outstanding scholars of British constitutional law and EU law discuss such factors as the impact of EU membership on the UK constitution and the perspectives of the UK’s constituent regions, along with numerous practical issues of economics and administration.

With Brexit becoming the largest single issue to affect the United Kingdom’s place in the world, this volume is certain to be widely read and referenced in the time before, during, and after the referendum. It will also remain of great value as social, political, and economic events unfold in the post-referendum United Kingdom.