The Rule of Law in Japan: A Comparative Analysis 4th ed 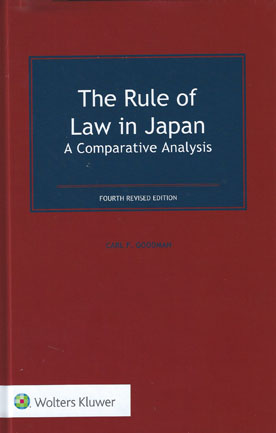 The Rule of Law in Japan: A Comparative Analysis systematically compares US and Japanese law across all major fields of legal practice taking into account their different civil/common law approaches and the unique history of modern Japanese law.

This fourth revised edition updates the work with the continuing dramatic changes in Japan’s legal system, including changes in criminal trials, disclosures to defense counsel of evidence to be used by the prosecution, the increasing use of recordings of interrogation sessions, and the impact of the indigenous movement for judicial reform.

What’s in this book:-

In this fourth revised edition, which follows the same comparative structure as the former editions, author Carl Goodman – an internationally known authority with extensive experience in international practice, university teaching in both Japan and the US, and US government service – takes expert stock of new developments, including the following:-

Although the alteration of the legal landscape in Japan is highly visible, the author does not hesitate to raise questions as to how far-reaching the changes really are. In almost every branch of the new Japanese legal practice, he uncovers ways in which laws and judicial rulings are closely qualified and are likely to present challenges in any given case, thus reminding the reader in each chapter that “what you see may not be what you get.”

How this will help you:-

Through a lens of legal norms and rules, this book provides a sophisticated understanding of the modern Japanese society. This work enables practitioners gain powerful insight into the influence of individualistic versus communal values on legal systems and such systems’ differing adoption of rule of law concepts. Thus, this book helps lawyers approach any case involving the Japanese legal norms confidently.

For these reasons, and for its comprehensive coverage, this new edition is sure to become the best-informed practical guide for non-Japanese lawyers with dealings in Japan.