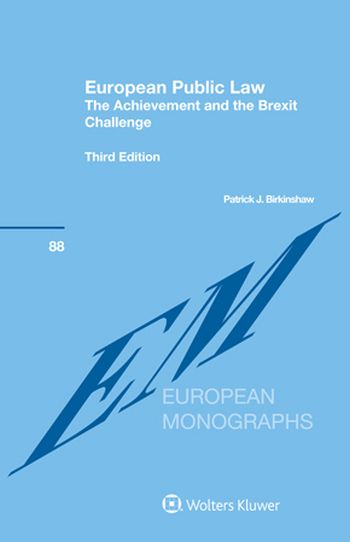 European Public Law analyses the development of the rule of law under European influence since the 1960s and offers an extended examination of the nature of the development which has had profound practical and legal consequences for Europe and the United Kingdom (UK). The sphere of public law is ill defined and controversial. Taking the broad view that it comprises aspects of constitutional principles, good and humane administration, judicial review based on the rule of law, human rights, liability for wrongdoing, public procurement, provision of public services, transparency, social media and protection of privacy – areas that link legal control to broad governmental purposes – the third edition of this established and much-praised work expands its examination on the emergence of European public law from European Union (EU) law (and its European Community and European Economic Community antecedents), the European Convention on Human Rights and the interface of these systems with Member State systems to include the currently all-important challenge of Brexit.

The book explains European public law in detail and the context in which laws interact in European societies. Masterfully summarising the debate surrounding the influence of EU and European Convention law on Member State law – particularly that of the UK – in a thematic and analytical manner, the author covers the following topics and much more as they persist in the shadow of Brexit:

Detailed analyses of major cases and legal provisions are featured throughout the book.

Given that the effects of Brexit will take decades to unfold, and not only in the UK, this new edition of a classic text will prove to be an invaluable guide to the ever-developing European context of domestic public law. The book will be of enormous assistance to political theorists, scientists and commentators and of immeasurable practical and academic importance in monitoring the future of Europe and its legal relationship with the UK. Academics and students will be rewarded by the detailed analysis of the context in which national laws and European laws interact. Practitioners globally, in the UK and Europe will gain invaluable insights into the laws they use to resolve practical questions of legal interpretation.