The Law Relating to the Taxation of Foreign Income 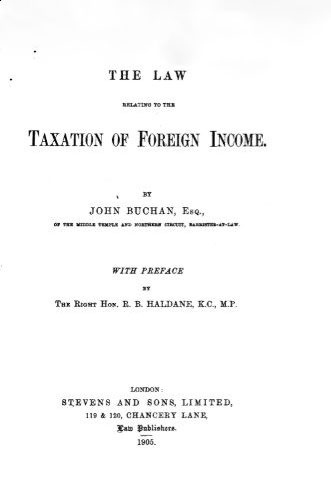 The writer's aim in this little work has been to collect the provisions of law specially relating to the Taxation of Foreign Income, both for the benefit of the practising lawyer whose work leads him but rarely into the domain of Revenue Law, and of the business man whose investments and interests lie partly abroad.

For the sake of the latter, the practice of foreign countries has been analysed in the Introduction, and the law has been cast into the form of rules to simplify and facilitate reference. It is hoped that by this means a business man may be enabled to estimate without too great difficulty the extent to which his foreign profits will be brought into charge, both in the United Kingdom and in their country of origin.

It need scarcely be added that, as in all unauthorised digests, the rules can only be considered as law in so far as they are logical inductions from the various statutes and decided cases. I have not thought it necessary to print the chief Taxing Acts as an Appendix, since the book deals with only a small section of the area which they govern. For these the reader is referred to Mr. Stephen Dowell's admirable work, to which, in common with all writers on Revenue Law, I owe a debt of gratitude.

My thanks are due to the many friends who have helped me with information and advice. I am especially indebted to Mr. Haldane for his Preface, and to the Department of Inland Revenue, who readily afforded me assistance whenever I sought it.