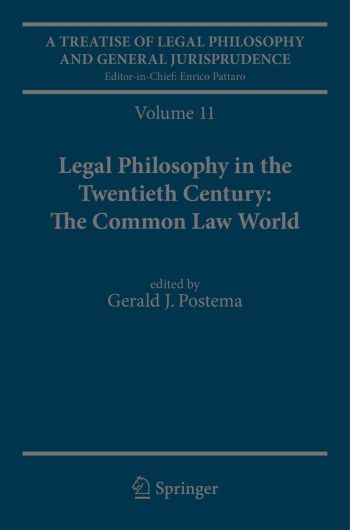 Volume 11, the sixth of the historical volumes of A Treatise of Legal Philosophy and General Jurisprudence, offers a fresh, philosophically engaged, critical interpretation of the main currents of jurisprudential thought in the English-speaking world of the 20th century. It tells the tale of two lectures and their legacies: Oliver Wendell Holmes, Jr.'s "The Path of Law" (1897) and H.L.A. Hart's Holmes Lecture, "Positivism and the Separation of Law and Morals" (1958). Holmes's radical challenge to late 19th century legal science gave birth to a rich variety of competing approaches to understanding law and legal reasoning from realism to economic jurisprudence to legal pragmatism, from recovery of key elements of common law jurisprudence and rule of law doctrine in the work of Llewellyn, Fuller and Hayek to root-and-branch attacks on the ideology of law by the Critical Legal Studies and Feminist movements. Hart, simultaneously building upon and transforming the undations of Austinian analytic jurisprudence laid in the early 20th century, introduced rigorous philosophical method to English-speaking jurisprudence and offered a reinterpretation of legal positivism which set the agenda for analytic legal philosophy to the end of the century and beyond. A wide-ranging debate over the role of moral principles in legal reasoning, sparked by Dworkin's fundamental challenge to Hart's theory, generated competing interpretations of and fundamental challenges to core doctrines of Hart's positivism, including the nature and role of conventions at the foundations of law and the methodology of philosophical jurisprudence.