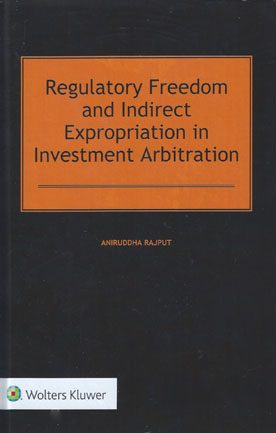 Regulatory Freedom and Indirect Expropriation in Investment Arbitrationpresents a conceptual framework for the scope, relationship and method for delineating between regulatory freedom and indirect expropriation and ways for resolving these issues in practice.

This book provides the first focused analysis of indirect expropriation and regulatory freedom, drawing on a broad range of the jurisprudence of investment tribunals, as well as of other international courts and tribunals such as the International Court of Justice (ICJ), Permanent Court of International Justice (PCIJ), dispute resolution bodies of the World Trade Organization (WTO) and European Court of Human Rights.

The book provides detailed responses to the following complex questions:-

Given the dense network of more than three thousand bilateral investment treaties (BITs) that impose an obligation to protect foreign investments in a State, this book will help practitioners identify, through analysis of cases from diverse fields, how a situation may be categorized either as regulatory freedom or as indirect expropriation. The analysis will also be of value to government officials and lawyers involved in negotiating and re-negotiating investment treaties, as well as to arbitrators who have to decide these issues. Scholars will welcome the book’s keen insight into the contentious relationship between a customary international law norm and a treaty norm.