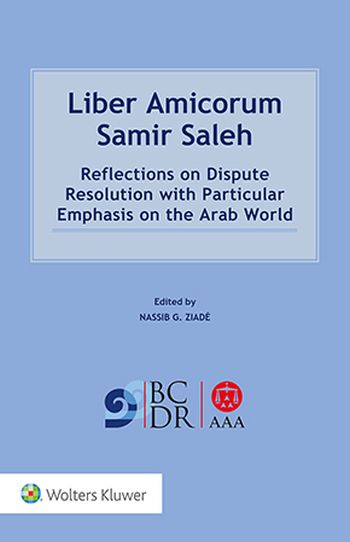 Liber Amicorum Samir Saleh has been conceived to honor Dr. Samir Saleh, one of the leading scholars and international lawyers in the Arab World. It brilliantly upturns the widespread perception that the Islamic and Arab worlds fail to conform to today’s internationalized approach to dispute resolution. With contributions from nineteen eminent authors – judges, arbitrators, academics, practicing lawyers, representatives of international arbitral institutions – this collection of essays and analyses manifests the salutary worldwide influence of Arab law and its intersection with the common law and civil law traditions.

The book offers work in English and French that focuses on the fields of law to which Mr. Saleh has made his most significant contributions, namely, arbitration and mediation in different types of international disputes. Among the issues and topics covered are the following:

The authors highlight the ongoing challenges and outlook for dispute resolution in the region, discussing case law, evolving legislation, and changes in the practice of international arbitration and mediation in several Arab countries. As an overview of topical issues in international commercial arbitration, this book explains how arbitration institutions have evolved during the past decades.

Mr. Saleh’s work in strengthening international law while bridging the legal and cultural divides between the Arab region and the rest of the world will undoubtedly continue to inspire generations to come. Given recent developments in Arab and Islamic law and the resulting focus on Arab scholarship and jurisprudence, along with Mr. Saleh’s unparalleled influence on dispute resolution in the Arab world and beyond, the wide-ranging expertise revealed in this Liber Amicorum is sure to be of great practical value to international law practitioners and law firms, alternative dispute resolution scholars, and arbitral institutions worldwide.