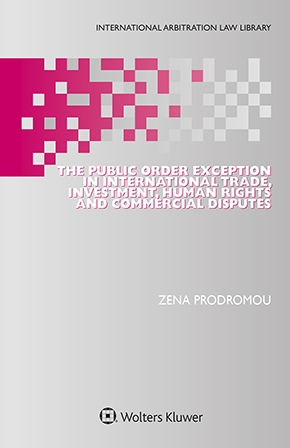 The Public Order Exception in International Trade, Investment, Human Rights and Commercial Disputes is a trailblazer book that analyses on a stand-alone as well as on a comparative basis – from a substantive and also from a procedural perspective – the public order exception’s application in international dispute resolution. Parties to international disputes increasingly invoke the need to protect the domestic public order in order to justify actions otherwise in breach of their obligations under international law. The term ‘public order’ nevertheless remains unclear as do the criteria and factors against which different international dispute bodies assess the parties’ respective claims. This unique book presents, systematizes and synthesizes all relevant jurisprudence in this field of law, identifies points of controversy and provides practical insights on the factors and grounds that are determinate in both upholding and dismissing the exception’s application.

This spearhead book delves deep into relevant case laws, provides original comparative review and analysis of the jurisprudence and uses tables and graphs to highlight key aspects. It imparts clear-cut guidelines to overcome the tensions and pitfalls inherent in invoking the public order exception and augment the chances of bringing a successful claim on either sides of a dispute.