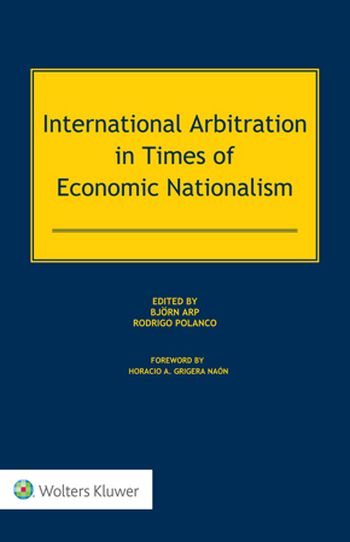 International Arbitration in Times of Economic Nationalism is a well-timed book that reviews situations that may impact the way arbitration—in both commercial and investment disputes—is practiced. In recent years, numerous developments across the world evidence the States’ increasing skepticism about the benefits of international cooperation and the efficiency of international economic law comprehended as a multilateral set of rules binding on all States equally.

A wide range of topics, encompassing a broad spectrum of juristic traditions, geographic areas, foreign investment protection laws, and dispute resolution mechanisms and issues, have been analyzed in depth by eminent international arbitrators and academic experts. The following topics are addressed:

This unique book furnishes a comparative analysis of various contemporary transformations of dispute settlement mechanisms, focusing on the developments in several jurisdictions including the United States, the European Union, China, Canada, Switzerland, Turkey, and the Latin American countries.

Evaluating how economic nationalism may lead to restricting the jurisdictional, procedural, and substantive scope of arbitration, the authors lay emphasis on the significance of a robust system of international arbitration of economic disputes to warrant a sound and secure world order. The global coverage of the contributions and the insightful views offered in them speak eloquently about their usefulness and outreach to arbitration practitioners and scholars, as well as to professionals involved in drafting policies for economic development or in the negotiation of investment agreements.