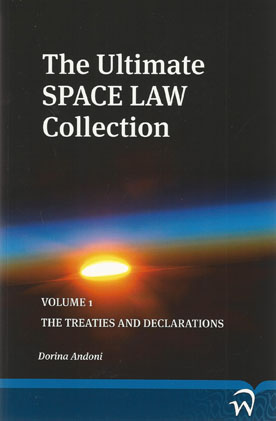 The term Space Law refers to the body of international and national laws and customs governing human activities in outer space. For the past half century, the majority of outer space operations have been conducted by government agencies.

We now, however, stand at the precipice of a new era in spaceflight. Following the retirement of the Space Shuttle, private companies are preparing to assume many of the missions traditionally undertaken by governments and to open outer space to the general public. At the same time, questions of ownership and commercialization, environmental protection, as well as peaceful and equitable use of outer space, are rising. As space activities grow, space law will have to face new challenges.

This first volume of the series The Ultimate Space Law Collection is consisted of the five international legal instruments, namely the Outer Space Treaty, the Rescue Agreement, the Liability Convention, the Registration Convention and the Moon Agreement, as well as, the most important declarations and principles as well as relevant Resolutions of the General Assembly.

These instruments provide for non-appropriation of outer space by any one country, arms control, the freedom of exploration, liability for damage caused by space objects, the safety and rescue of spacecrafts and astronauts, the prevention of harmful interference with space activities, scientific investigation and the exploitation of natural resources in outer space and the settlement of disputes.