Services of General Interest Beyond the Single Market: External and International Law Dimensions 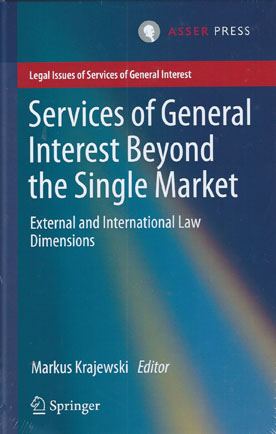 However, the debates about the impact of EU law on services of general interest usually focus on internal market law such as the free movement of services, competition law, state aid rules and the law of public procurement. The external and international dimensions of the European legal framework for services of general interest are often overlooked.

This book addresses the impact of international trade and investment agreements on public services and the role these services play in EU external relations. It shows that the inherent tension between establishing and securing undistorted competition on markets and the logic of public services exists in international economic law in a similar way as in EU internal law.

Given the contentiousness of international trade and investment agreements as well as the EU's external policies, the issues discussed in this volume are timely and relevant and contribute to the ongoing debate about the future of services of general interest in the EU with fresh ideas and perspectives.

Markus Krajewski is Professor of Public and International Law at the University of Erlangen-Nuremberg, Germany.

Contents:
Introduction.
Revisiting the impact of GATS on public services.
WTO procurement rules: in particular the Government Procurement Agreement (GPA) and services of general interest.
Regulating Public Services and International Investment Law.
NAFTA's Approach to Protecting Public Services: Fragmentary, Asymmetrical, Rigid and Limited.
Emerging principles of international competition law: Do Public Services Matter?.
Services of General Interests under Regimes of Fiscal Austerity.
A normative basis for EU external relations? Protecting internal values beyond the Single Market.
Ambivalence of the European strategy in external relations on trade agreements.
Public services exemptions in EU free trade and investment agreements.
Services of General Interest in the European Neighbourhood Policy.
Towards an International Regime of Regulating Electronic Communications.
Services of General Interest and the External Dimension of the EU Energy Policy.
The impact of free trade agreements on local self
government
The provision of drinking water by local utilities in Germany as a case study.
Health systems and policy space for health in the context of European Union trade policies.