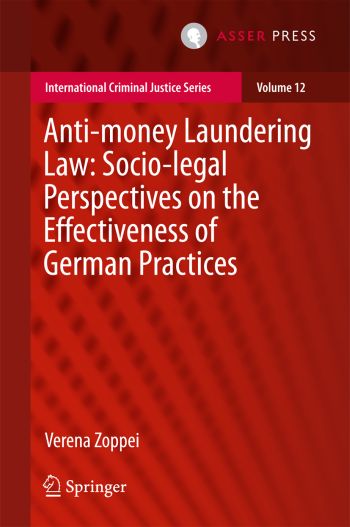 In the aftermath of recent multiple leaks such as the Panama Papers, the Swiss leaks, and the Bahama leaks, this book offers an interesting view on the underlying conflicting interests that impede the adoption of more effective legislation to stop money laundering by way of the financial system.

The central position of the book is that the declared goals underlying the criminalization of money laundering have not been fulfilled. The effectiveness of the anti-money laundering regime in Germany is assessed by examining the indirect effects, collateral consequences, and positive interpretations of the law in action and of the law inaction; reducing the issue to a question of symbolic effectiveness does not reflect the complexity of the matter. What is demonstrated, is that the goals attributed to the regime were too ambitious, and that a lower degree of effectiveness has been accepted in order to balance the inherent political, economic and financial conflicting interests.

Unlike other volumes focusing on this issue, this book deals with the implementation of the legislation and the consequences thereof, and is primarily aimed at legal sociologists, sociology of law researchers, criminal lawyers, criminologists with an interest in white collar crime and political scientists studying measures against illicit financial flows and the concrete implementation of anti-money laundering laws. The book will also be of interest to policymakers and consultants, as well as policymakers and consultants at a German level for instance working on improving the instruments to fight organized crime and preventing the financing of terrorism through money laundering.

The complexity of the anti-money laundering regime and all the variables are exhaustively and critically reviewed in the assessment, thereby providing complete instructions for future legislative steps. The case study regarding the situation in Germany maximizes readers’ insights into concrete effects of the implementation of international anti-money laundering standards at a national level, and the opinions of professionals working in the field and of experts on the law-making process are also illumination. Moreover, the book equips non-German speakers with the information needed to deal with the extensive German legal scholarly production on article 261 of the German criminal code and the current internal political debate on the matter.

Contents:
Introduction
The socio-legal framework
The international law-making process
The German law-making process: Tracing legislative intents
The doctrinal legal debate on Article 261 of the German Criminal Code
Data on the implementation of the anti-money laundering regime
Opinions on the anti-money laundering regime. The implementation of the law from the perspective of legal actors and experts
Conclusions