The Appellate Body of the WTO and Its Reform 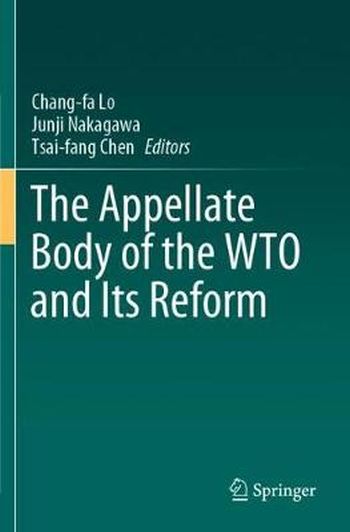 This is the first book that critically examines the reform of the Appellate Body (AB) of the World Trade Organization (WTO) in light of the current crisis resulting from the U.S. blocking of the appointment of its members.

Contributed by world-renowned academics, experts, and practitioners in the field of international economic law, this volume provides a comprehensive analysis of the AB crisis and its solutions.

Contents:
Part I: The AB in the WTO Governance and Its Reform - Broader Perspectives
1. Chang-fa Lo, Junji Nakagawa and Tsai-fang Chen: Introduction: Saving the Jewel in the Crown
2. Ulrich Petersmann: Between "Member-Driven Governance" and "Judicialization": Constitutional and Judicial Dilemmas in The World Trading System
3. Mitsuo Matsushita: Reforming the Appellate Body
4. Colin Picker: The AB Crisis as Symptomatic of the WTO's Foundational Defects or: How I Learned to Stop Worrying and Love the AB
5. Markus Wagner, The Impending Demise of the WTO Appellate Body: From Centrepiece to Historical Relic?
6. R. Rajesh Babu: WTO Appellate Body Overreach and the Crisis in the Making: A View from the South
Part II: Reforms in Relation to the Basic Functions of the AB
7. Raj Bhala, Why the WTO Adjudicatory Crisis Will Not Be Easily Solved: Defining and Responding to "Judicial Activism"
8. Chang-fa Lo: A Proper Balance between WTO's Members-Driven Nature and the Appellate Body's Role as an Adjudicator - Careful Exercise of Judicial Activism
9. Niall Meagher: The Judicial Style of the Appellate Body
10. Yuka Fukunaga: Interpretative Authority of the Appellate Body: Replies to the Criticism by the United States
11. Tsai-fang Chen: Judicial Economy and Advisory Opinions of the Appellate Body - Potential Reform of Article 17.12 of the DSU
12. Tomohiko Kobayashi: The Use of Panel Process to Improve the Function of the Appellate Body: A Proposal to Utilize the Expert Review Group
Part III: Options to Address the Crisis and Wider Implications Beyond the WTO
13. Henry Gao, Disruptive Construction or Constructive Destruction? Reflections on the Appellate Body Crisis
14. Rajesh Sharma: WTO Appellate Body at Crossroads: Options and Alternatives
15. Poching Lee: Appointment and Reappointment of the Appellate Body Members: Judiciary or Politics
16. Fernando Dias Simoes: Should Appellate Body Members Work Full Time
17. Jaemin Lee: The Appellate Body as a Trailblazer - Facilitation of Appellate Mechanism Discussion in Other International Courts
18. Joanna Jemielniak: The WTO AB as a Model for Other Adjudicatory Bodies - the Case of EU Investment Court System