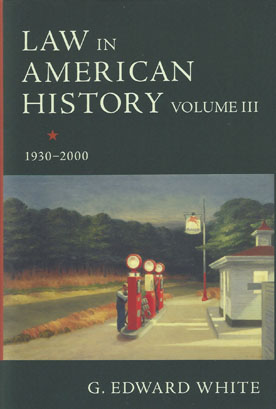 In Law in American History, Volume III: 1930-2000, the eminent legal scholar G. Edward White concludes his sweeping history of law in America, from the colonial era to the near-present. Picking up where his previous volume left off, at the end of the 1920s, White turns his attention to modern developments in both public and private law. One of his findings is that despite the massive changes in American society since the New Deal, some of the landmark constitutional decisions from that period remain salient today. An illustration is the Court's sweeping interpretation of the reach of Congress's power under the Commerce Clause in Wickard v. Filburn (1942), a decision that figured prominently in the Supreme Court's recent decision to uphold the Affordable Care Act.

In these formative years of modern American jurisprudence, courts responded to, and affected, the emerging role of the state and federal governments as regulatory and redistributive institutions and the growing participation of the United States in world affairs. They extended their reach into domains they had mostly ignored: foreign policy, executive power, criminal procedure, and the rights of speech, sexuality, and voting. Today, the United States continues to grapple with changing legal issues in each of those domains. Law in American History, Volume III provides an authoritative introduction to how modern American jurisprudence emerged and evolved of the course of the twentieth century, and the impact of law on every major feature of American life in that century. White's two preceding volumes and this one constitute a definitive treatment of the role of law in American history.