The President and Immigration Law 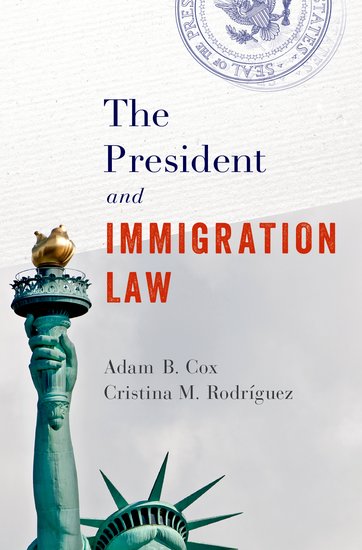 When President Barack Obama announced his plans to shield millions of immigrants from deportation, Congress and the commentariat pilloried him for acting unilaterally. When President Donald Trump attempted to ban immigration from six predominantly Muslim counties, a different collection of critics attacked the action as tyrannical. Beneath this polarized political resistance lies a widely shared belief: that Congress, not the President, makes our immigration policies, dictating who can come to the United States, and who can stay, in a detailed and comprehensive legislative code.

In The President and Immigration Law, Adam Cox and Cristina Rodriguez shatter the myth that Congress controls immigration policy. Drawing on a wide range of sources-rich historical materials, unique data on immigration enforcement, and insider accounts of our nation's massive immigration bureaucracy-they tell the story of how the President became our immigration policymaker in chief over the course of two centuries. From founding-era debates over the Alien and Sedition Acts to Jimmy Carter's intervention during the Mariel boatlift from Cuba, presidential crisis management has played an important role in this story. Far more foundational, however, has been the ordinary executive obligation to enforce the law. Over time, the power born of that duty has become the central vehicle for making immigration policy in the United States.

A pathbreaking account of the President's relationship to Congress, The President and Immigration Law helps us better understand how the United States ended up running an enormous shadow immigration system-one in which nearly half of all noncitizens living in America are here in violation of the law. It also provides a blueprint for reform, one that accepts rather than laments the role the President plays in shaping the national community, while outlining strategies to curb the abuse of law enforcement authority in immigration and beyond.