The Nature of Legislative Intent (eBook) 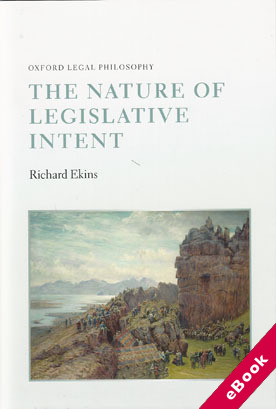 
ISBN13: 9780191645945
Published: October 2012
Publisher: Oxford University Press
Country of Publication: UK
Format: eBook (ePub)
Price: £21.98
The amount of VAT charged may change depending on your location of use.
Convert Currency

Many scholars argue that legislative intent is a fiction: the legislative assembly is a large, diverse group rather than a single person and it seems a mystery how the intentions of the individual legislators might somehow add up to a coherent group intention.

This book argues that in enacting a statute the well-formed legislature forms and acts on a detailed intention, which is the legislative intent. The foundation of the argument is an analysis of how the members of purposive groups act together by way of common plans, sometimes forming complex group agents. The book extends this analysis to the legislature, considering what it is to legislate and how members of the assembly cooperate to legislate.

The book argues that to legislate is to choose to change the law for some reason: the well-formed legislature has the capacity to consider what should be done and to act to that end. This argument is supported by reflection on the centrality of intention to the nature of language use. The book then explains in detail how members of the assembly form and act on joint intentions, which do not reduce to the intentions of each member, before outlining some implications of this account for the practice of statutory interpretation.

Developing a robust account of the nature and importance of legislative intention, the book represents a significant contribution to the literature on deliberative democracy that will be of interest to all those thinking about legal interpretation and constitutional theory. Oxford Legal Philosophy publishes the best new work in philosophically-oriented legal theory.

It commissions and solicits monographs in all branches of the subject, including works on philosophical issues in all areas of public and private law, and in the national, transnational, and international realms; studies of the nature of law, legal institutions, and legal reasoning; treatments of problems in political morality as they bear on law; and explorations in the nature and development of legal philosophy itself.

The series represents diverse traditions of thought but always with an emphasis on rigour and originality. It sets the standard in contemporary jurisprudence.