The Collapse of Constitutional Remedies 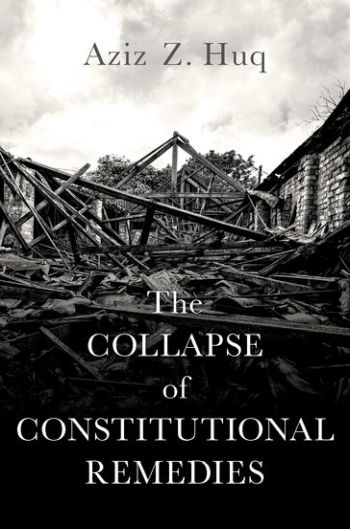 An exploration of how and why the Constitution's plan for independent courts has failed to protect individuals' constitutional rights, while advancing regressive and reactionary barriers to progressive regulation.

Just recently, the Supreme Court rejected an argument by plaintiffs that police officers should no longer be protected by the doctrine of "qualified immunity" when they shoot or brutalize an innocent civilian. "Qualified immunity" is but one of several judicial inventions that shields state violence and thwarts the vindication of our rights. But aren't courts supposed to be protectors of individual rights? As Aziz Huq shows in The Collapse of Constitutional Remedies, history reveals a much more tangled relationship between the Constitution's system of independent courts and the protection of constitutional rights.

While doctrines such as "qualified immunity" may seem abstract, their real-world harms are anything but. A highway patrol officer stops a person's car in violation of the Fourth Amendment, violently yanked the person out and threw him to the ground, causing brain damage. A municipal agency fires a person for testifying in a legal proceeding involving her boss's family-and then laughed in her face when she demanded her job back. In all these cases, state defendants walked away with the most minor of penalties (if any at all). Ultimately, we may have rights when challenging the state, but no remedies. In fact, federal courts have long been fickle and unreliable guardians of individual rights. To be sure, through the mid-twentieth century, the courts positioned themselves as the ultimate protector of citizens suffering the state's infringement of their rights. But they have more recently abandoned, and even aggressively repudiated, a role as the protector of individual rights in the face of abuses by the state. Ironically, this collapse flows not decisions that the Framers took when setting up federal courts in the first place.

A powerful historical account of the how the expansion of the immunity principle generated yawning gap between rights and remedies in contemporary America, The Collapse of Constitutional Remedies will reshape our understanding of why it has become so difficult to effectively challenge crimes committed by the state.