This book is now Out of Print.
A new edition has been published, the details can be seen here:
Applications to Wind Up Companies 4th ed isbn 9780198869726 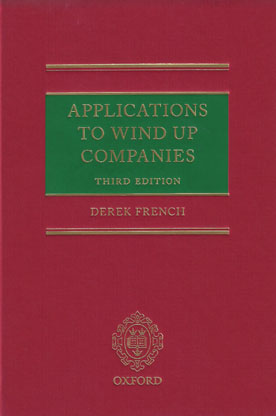 This book deals with the procedure for obtaining a winding-up order chronologically from presentation of a petition through to making the order. It also looks at the application process as it applies to various classes of petitioner, such as creditors, contributories (shareholders) and public officials.

The third edition is completely updated to cover new legislation and new procedures. It includes new coverage of winding up through administrations, winding up insolvent partnerships other than as unregistered companies, and considers the practice and procedure issues of industry-specific administration regimes (from water companies to energy supply companies) and their interaction with winding up. Though focused on the procedure in the courts of England and Wales, the work also considers the jurisprudence of the many Commonwealth jurisdictions which have adopted the English procedure.

This work contains all there is to know about applying (petitioning) to have companies and similar entities wound up by the court, making it essential for all lawyers who make, or defend, such applications.

Contents:
1. Jurisdiction, sources and generally applicable rules
2. Presentation of a winding-up petition
3. Between Presentation and hearing
4. Appointment of a Provisional Liquidator
5. Hearing the Petition and Making the Order
6. Review of Orders
7. Petitions by Creditors
8. Petitions by Contributories
9. Public Interest Petitions
10. Company Already Subject to Insolvency Proceedings
11. Other Petitioners